Mollie B with Squeezebox and Ted Lange 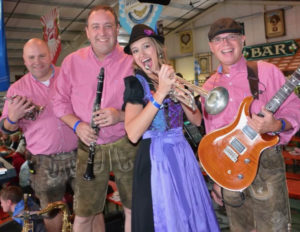 “Mollie B plays over 15 instruments in one song!”

“They love what they are doing!”

Those are just some of the comments you will hear people say after hearing SqueezeBox perform at Wurstfest.
SqueezeBox performs over 125 performances a year, nation-wide and is happy to make Wurstfest part of their fall tour now for ten years. The band is head-lined by multi-instrumentalist, Mollie B, who is the host of the Mollie B Polka Party TV show on RFD-TV; and two-time Grammy Nominee, Ted Lange. Besides being featured many times on the Mollie B Polka Party, the band has also written a song for and appeared in the latest Clint Eastwood film, “The Mule.”

The band, as well as the unstoppable duo, Ted and Mollie, have won multiple awards for their recordings. Additionally, Ted & Mollie B co-produced and performed in the the award-winning live show the “Mollie B Christmas Special” for multiple years in Branson, Missouri.

To date, SqueezeBox has released four CDs. They have performed all over the US to capacity crowds, and since November 2010, have made over 1200 appearances in 23 states.

When not performing for live events, Ted and Mollie can be found working on the Mollie B Polka Party Radio Show on SiriusXM, Channel 147. The radio show airs every Sunday from 10am-noon CST.

At Wurstfest, SqueezeBox can be seen at four of the venues. You can expect different shows at the different venues. So, don’t miss out and see them at the big tent, little tent, Stelzenhaus, and Steltzenplatz. A special note to our dancing friends, SqueezeBox wil be in the Stelzenhaus on Monday & Tuesday. We hope you enjoy the smooth dance floor along with the great music.